so as i mentioned the fridge disappeared, only a few pieces left….we all really cared for the fridge and appreciate the posts we were able to write about it but it’s better to have posted and lost then to have never posted at all.

in remeberance kelly built a cross to put in it’s place….but that was also absorbed by the ghetto a few days after placement, luckily we have pics…

here are her words

To commemorateÂ  the fridgeâ€™s too-short time with us, I made a memorial cross, like the kind you see off I-10 where people have died in wrecks. Itâ€™s painted crackhore orange instead of white (of course) and decorated with Mardi Gras beads and fake flowers from St. Patrickâ€™s Day in anticipation of the upcoming Carnival season. The vertical piece is a metal piece from the fridge, and the horizontal piece is a stick I found outside â€¦ I stuck it in the ground this morning. 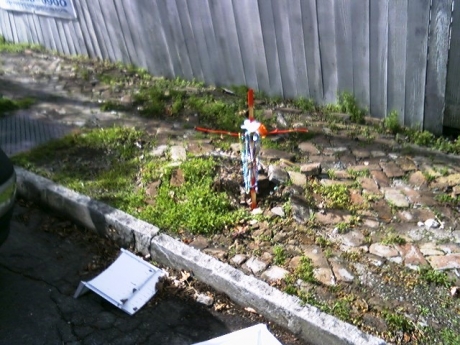 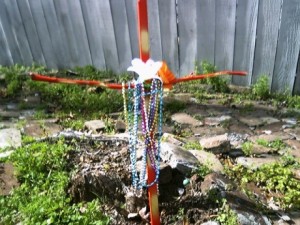 the fridge was just one of the things left in kelly’s neighbor to rot away. there is a broken down lexus about 100 yards away that is going to become the crackhore lexus night time i get near it with a sharpie 😀 The back window has already been bashed out and it has a club on the steering wheel so i think the crackhore lexus might last a little bit longer then the fridge….

The owner (I assume) left a note on the driver side window asking thatÂ the carÂ not be towed. He/she also left two phone numbers. This car has been sitting on my street for around three weeks now, maybe longer. Wonder what the story is. I do know that that note wonâ€™t do a damn thing to deter a city worker with a tow truckâ€¦ but that probably wonâ€™t be a concern for a while. 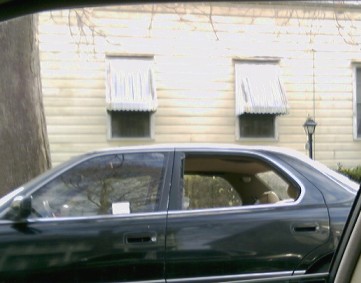